Charles Lindbergh's vision of coast-to-coast travel by plane and train in just 48 hours was only a dream until July 7th, 1929, when Transcontinental Air Transport's inaugural journey left New York City.  My Great Aunt Grace was one of a select few passengers on that historic journey, and she kept a diary of her experience.  Learn about the evolution of transportation in America, culminating in this exciting new venture that marked the dawn of commercial air passenger travel. 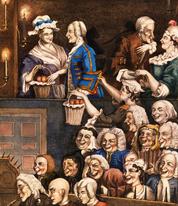 ​Many of the Colonies forbade playacting on the grounds that it was morally detrimental.  Two centuries later Reverend Smythe urged his congregation to avoid the Black Crook with its scantily clad dancers.  Members of his congregation promptly rushed out to buy tickets!  Theater has been used to ridicule, persuade, titillate, amuse and outrage audiences from every class.  This lecture takes a look at the evolution of theater from clandestine Colonial performances that landed the players in court to Vaudeville shows that packed theaters.

​Lynn clairvoyant Moll Pitcher's predictions of an ill-fated voyage were so powerful that they could render a ship crew-less if word got out.  This 17th century sybil is said to have made predictions that came to pass long after her death, including the radio, and she numbered among her clients such notables as the wealthy and eccentric Lord Timothy Dexter. This presentation has a surprise ending.

Discover how Hollywood evolved from a small, conservative community into a glittering movie mecca full of glamorous stars and eye-popping scandal.  See clips of the early films that launched the movie industry, and learn about the revolution in film that made it all possible.

The game bred gambling scandals and rivalries so bitter that the 1904 World Series was cancelled.  It also popularized Cracker Jacks, baseball cards and Broadway songs.  Trace the game's social, historical and professional evolution from 19th century "townball" to the formation of the major leagues.  Audience members have said, "This isn't just for baseball fans, its for anyone who loves history!"

Variations of baseball have been played for hundreds of years, including a rousing game of stoolball at Plimoth Plantation and games to pass the time during the Civil War.

Theater in America: Banned to Bawdy!

When Abigail Adams begged her husband to "remember the ladies" in drafting a new code of laws, John wrote back that he "could not but laugh" at her extraordinary suggestion.  Less than 150 years later, women were working, voting, and experiencing the first taste of freedoms unheard of just a generation earlier. This lecture traces the exciting social and historical milestones in the fight for women's rights.​