Click on the LECTURES Tab at Left for More Information​​

​Learn how Hollywood evolved into a glittering movie metropolis. See some of

Lindbergh's dream of rapid travel was realized on July 7th, 1929, and my Great Aunt Grace was one of a select few passengers!  Hear her firsthand account!​ 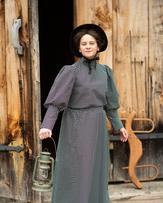 Click on the PERFORMANCES Tab at Left for More Information

Over 200 years ago world renowned clairvoyant Moll Pitcher of Lynn could cause an entire ship's crew to resign with her prediction of a doomed voyage.

Martha Washington relates the pleasures and challenges of

NEW!  Smithsonian Magazine declared,  "ELIZA HAMILTON IS DESERVING OF A MUSICAL OF HER OWN!" A fascinating and important historic figure in her own right, Mrs. Hamilton will share her story; the daughter of a Revolutionary General, the wife of a Founding Father, and the independent and indomitable woman who survived and thrived for nearly 100 years!

​​You received the most applause of any speaker we've ever had!

Thank you so much, Anne! It was an exceptional presen-tation much enjoyed by all!

Your program was very fascinating! Our enthusiastic audience left with glowing praise for the program. Thank you for an engaging and informative performance.

Everyone loved the singing!

Yesterday was a big success in my book! So many came to me asking me to bring you back!

Thank you for a really terrific evening! We continue to receive compliments about your program. We par-ticularly appreciated your lively, engaging presentation style and how you incor-porated cultural, social and political history.

Your presentation was thoroughly enlightening and entertaining. Your creative use of primary sources and historical facts made the program a truly unique experience.

We certainly enjoyed your last visit and look forward to another!

​​​​​It's 1884 and Belva Lockwood is on the campaign trail!  Attend her fiery campaign speech to hear her plans for equality and justice for all.  She'll recollect her humble beginnings, and describe her fight to become the first woman admitted to the Supreme Court Bar. Includes renditions of popular suffrage songs.

Feel the sea spray and hear the sailors' sea chanteys as you follow the sailing adventures of 19th century whaling wife Mary Chipman Lawrence, based upon her journals!

All this for Oregon?

her extraordinary life; two marriages, four children, and defining a brand new role in American politics. Martha was genteel, quick-witted, devoted to her husband, and an outspoken, loyal patriot highly regarded by the new nation!  Includes songs from the battlefields.

About:  Anne Barrett is an historian, actress, reenactor and performer specializing in portraying women in history and presenting lectures on unique historical topics.  Her dramatic stage performances include Martha Washington, Belva Lockwood who ran for president in 1884, whaling wife Mary Lawrence who sailed aboard the Addison, Eliza Hamilton, wife of Alexander Hamilton, and fictional character Victoria Yule who relates Christmas history.  Coming soon will be performances of Oregon Trail pioneer Amelia Stewart Knight, and journalist Nellie Bly.  Her lecture topics include Transcontinental Air Transport's air/rail commercial travel business, developed by Charles Lindbergh and involving Amelia Earhart, an overview of women's history from the 18th to the 20th centuries, the history of theater in America, the history of Hollywood and the film industry, the history of the game of baseball, and the life of Moll Pitcher, an 18th century clairvoyant from Lynn, Massachusetts.  Anne Barrett speaks at libraries, museums, historical societies, senior centers and council on aging facilities, retirement communities, and other social and educational organizations.  She is available to perform and lecture in Massachusetts, New Hampshire, Maine, Rhode Island, Vermont and Connecticut, as well as other states with additional travel fees.

"Victoria Yule" will entertain you with the history of holiday traditions, readings from Dickens, and songs of the season in her clear soprano.

Theater in America: Banned to Bawdy

​From Opening Day to last out at the World Series, baseball has exhilarated and exasperated fans since the mid 19th century. Find out why!​

Follow this amazing history from Abigail Adams reminding husband John to "remember the ladies" to the short skirts and bootleg gin of the roaring '20s.